I never roasted a whole chicken until I was 31 years old.  When I admit that, I feel like I should be in some sort of Poultry Lovers Anonymous group or something.  I’m not overly certain why it took me so long–especially since I decided to start learning to cook when I was 20.  One would think a basic skill like roasting a bird would’ve been high on my list.  One reason may be that I really like breast meat, frankly, and I know it’s better for you due to less fat, etc. (yes, I KNOW the thighs and other parts have better flavor), so I just wasn’t all that interested in this concept of roasting a bird.  My mom kept trying to convince me to do so, all through college, talking about how it’s much cheaper than buying boneless/skinless boobs.  I was not to be swayed.

I don’t really know why I wanted to start doing a roast chicken.  I think part of it had to do with being the host of Thanksgiving.  I was a total turkey noob and, together with my lack of experience roasting chicken, I had NO IDEA what I was doing.  Yet again, my mom had mentioned I could try out different spice rubs, etc., on a chicken before I committed to doing it on the big bird.  And yet again, I was not to be swayed.

Anyway, I make a roast chicken at least once a month now.  (How quickly things change, no?  Then again, my husband has professed that he really, really loves it when I make this dish, so that could have something to do with it.)  I freeze the carcass, the neck, and any other giblets that happen to be in the chicken and I make stock every couple months from 3 carcasses.

The recipe I love the most, though, is Thomas Keller’s, available many places on the net, but also here: http://www.epicurious.com/recipes/food/views/My-Favorite-Simple-Roast-Chicken-231348 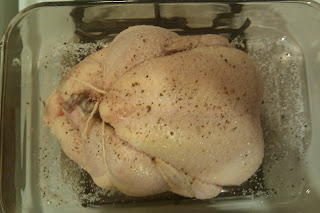 It is divine in its simplicity.  There’s not really much else to say…except for that it really messes up your oven with spatters, so it’s not the cleanest of roast chickens to make.

Tonight?
Roast chicken (poulet rôti, if you’re being fancy shmancy)
Sauteed chard with chanterelles and toasted hazelnuts
and perhaps a rice or something, but we’re trying to eat super healthy, so we’ll likely just load up on more chard or make a salad.