I’ll keep this one pretty short, too.

Chicken in a Pot
Verdict: eh.

I made this for a gathering of women while the men played poker.  It is certainly a dramatic dish to take out of the oven and it really smelled good, too!  I have an open-concept kitchen and dining room, so everyone could see me pry open the lid on my Staub casserole.  We all ooooh’d and aaaaah’d at the steam and the lovely aromas.  It was beautiful, really.  The flavor?  Eh.  We all passed the salt and pepper a few times and  the professional chef at the table (no pressure, right?) mentioned that it needed not only more seasonings in terms of salt and pepper (a really abnormal problem for me), but also more in the way of bouquet garni.  Or something.  None of us could quite put our fingers on it.  It’s also a tough dish precisely because you can’t taste it while you’re going along.  I don’t know that I’ll be making this again as I’ve other braised chicken dishes I much, much prefer.

Gateau Basque
Verdict: I loved it.  Some of the others thought it was okay.

I also made this for the gathering of women.  I think the big reason for the disparity in verdict is that French desserts are often not that sweet, and I’m not even sure I’d classify this as a dessert.  The drier texture of French pastry, particularly for cakes, is also something that some Americans are not expecting.

Personally, I thought it was a perfect end to a meal with its crumbly, cookie-ish dough and the not-too-sweet black cherry jam that was imported from the Basque country (actually, the producers are distant relatives of mine).  It was expensive, so I won’t be making it often: the little 3/4 cup jar of jam cost about $20 after shipping and what-not.  It was a fun and easy dish to make and I’m looking forward to doing a big taste test–Cherries vs Pastry Cream–at Easter when my family comes over. 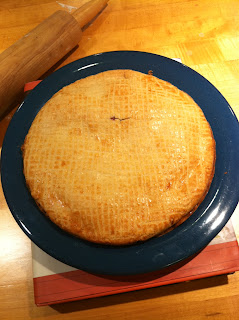 Caramelized-Apple Skillet Cake (from The Craft of Baking)
Verdict: WOW.

I was going over to that professional chef’s house for lunch last week and my task was to make dessert…I’m known as the “Dessert Girl.”  I didn’t want to do any shopping and I only had about an hour, so I flipped through some recipes until I found this.  It’s simple really: make the caramel, put the apples in it, make the cake dough (including a bit of cornmeal for some nice texture differentials), then bake it all for about 45 minutes.

The result is a cake with a wonderful texture and the flavor of a pineapple upside-down cake, but with caramelized apples.  In other words?  AWESOME.  There were some other people over that day, too, and they all had 3 pieces.  It was just amazing.

Spicy Caramel Popcorn aka Adult Cracker Jacks (also from The Craft of Baking)
Verdict: Heaven in a Bowl

I wanted dessert the other night.  I thought I wanted cookies, and was looking for quick cookie recipes.  I had just about settled on a nutty cookie recipe from AmFT when I saw this one.  It’s really, really fast to make–almost as fast as making Rice Krispie treats.  And it is amazingly good.  The spiciness comes from adding some cayenne pepper to the mix.

I brought some for my office-mate and she waxed rhapsodic about it for days.

Here’s a link to an adapted version.  (I actually made the full amount of popcorn and only 1/2 the caramel since I was running low on sugar.  I’ve since made it that way nearly every time and have found that I prefer it with 1/2 the caramel.  Just an FYI.)

« FFwD: The Short Ribs Were So Good That I Can’t Think of a Witty Title
FFwD: Where has all the time gone? (Scheduled Recipes) »